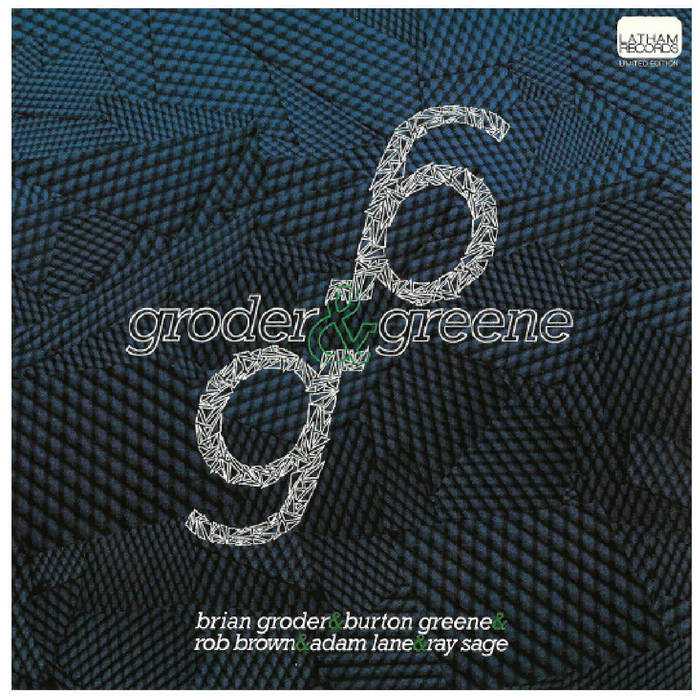 "After taking octogenarian saxophonist Sam Rivers on one of the most exciting rides of recent years on 2006's Torque, trumpeter Brian Groder has teamed up with another iconic figure of free jazz, pianist Burton Greene, for nine magnificent musical adventures recorded, appropriately enough, in Greene Street Studios NYC in October 2007. Without wanting in any way to downplay the importance of Groder's limpid and remarkably inventive trumpet and fluegelhorn playing, or alto saxophonist Rob Brown's technically and musically outstanding contributions (there's no point in even saying that, as everything Brown has committed to record in his lifetime has been technically and musically outstanding), the date belongs to Greene, not because he deliberately pushes everyone else to the sidelines, but because his contributions as both soloist and especially accompanist are so startlingly original that they command attention, from the inspired octatonic riffery of "Landfall" to the inside-piano investigations of "Amulet", from the virtuosity of "Cryptic Means" to the spiky comping of "Nigh".
Sometimes it's all a bit over the top ("Hey, Pithy, Can You Thropt the Erectus?" owes much more to Greene than its punning title), but, hey, I'd rather it was like that instead of some earnest MOR Clean Feed outing where everyone is so afraid of walking on anyone else's toes that nobody moves at all. Greene has worked before with bassist Adam Lane – notably on 2004's Isms Out (CIMP) with Roy Campbell and Lou Grassi – and it shows: Lane is acutely aware of the pianist's left hand, and its tendency to provide the low and mid-register harmonic information, and concentrates accordingly on the more melodic upper octaves of his instrument. Which is not to say the pianist rides roughshod over Lane when the latter takes a solo – far from it: Greene's ear and sense of space is as acute as ever.
In such ebullient company, a flamboyant drummer (like Han Bennink) would probably sink the ship altogether, so it's just as well Ray Sage is on hand to keep the beats tight and the music on course to its final destination. This is a truly splendid album, easily the best thing Burton's released in years, and one of the freshest and most enjoyable releases of the year" ~Dan Warburton, ParisTransAtlantic

"Appearing on numerous top-ten lists for 2009, Groder & Greene brings together NYC free jazz trumpeter/flugelhorn player Brian Groder with Chicago-born/Amsterdam-based free jazz piano legend Burton Greene - veteran of the NYC Avanat Garde scene and contemporary of such folks as Archie Shepp,Henry Grimes and Bill Dixon. They are joined by alto saxophonist Rob Brown, double-bassist Adam Lane and drummer Ray Sage in creating eight efficacious improvised pieces that range from ferocious (the excellent opener "Landfall") to quiet and strange ("Amulet") with every variation between. The strength of the players and exceptional rapport they bring the sessions takes what should by any means be chaos and instead weaves spontaneous compositions out of the cacophony. All of the players exhibit exceptional abilities within this genre, with Greene attracting the ear with piano work that at times tinkles odd notes, or canters across the keys and at others pounds out furious fistfuls of block chords. He truly seems a perfect foil for Groder's strong melodic touch, and the other musicians also seem especially well chosen for this project. Superb tracks like "Only the Now," "Separate Being," "Nigh," and 'Surmised Wink" are remarkable examples of free jazz music at its finest - full of unexpected surprises mad intriguing directions, while the cover of Greene's "Hey Pithy, Can You Thropt the Erectus" is an engaging treat. "Cryptic Means" features the duo without the rest of the bend in a rewarding turn, and the haunting "Sleepwalker" ends this dreamlike experience (complete with nightmares) in delicious fashion. Locally, fans of the Velvet Lounge free form jam sessions should find this disc appealing."
~Brad Walseth, JazzChicago

Listening to a recording of free jazz is a bit like watching travelers in a busy train terminal. People of all sizes and colors are moving in every direction; some of them are headed out of town, while some are on their way home. What these folks share is the need to get to the platform or the street straight away, and each pace, sidestep and sudden, momentary halt serves this heightened sense of purpose. Before long, what was initially perceived as a formless mass becomes perceptible, if constantly changing currents, carrying people to their destinations. There is no superstructure to it per se; but there is an organic quality that is fascinating to behold.

One reason this analogy holds any water lies in the sophistication of free jazz practitioners as travelers, one that extends far beyond the ability to bob and weave through a crowd. It is the acuity that comes from regularly being in transit, the sharpened sense of time and of the changing options each moment brings, that is most pointedly applicable to free jazz. Free jazz is music of, by and for the moment, a navigational, not an architectural endeavor. Certainly, each moment brings formal considerations to the fore; yet, the appropriate response is to deal with them in passing, as the next moment will present more. In doing so, the integrity of free jazz as a method – as opposed to a genre – is maintained.

This adherence to methodology gives free jazz a unique and intriguing projection of form unfolding in real time. Mature practitioners understand the rigor entailed in being responsive, but not over committing to any material. The causeway to the next moment has to remain open, and locking into a phrase or a rhythm may well work against that priority. Without the anticipation of and a clear path to the next moment, free jazz becomes clogged with pastiche. What distinguishes free jazz is not idiomatic references or even flares of virtuosic brilliance, but the conveyance of spontaneous interaction and invention.

Free jazz has retained its vitality in large measure because it is resistant to codification – there’s no fake book for it. This is extraordinary, given that free jazz has now been extensively documented and strenuously scrutinized for approximately a half century, roughly the time span between Stephen Foster’s “Beautiful Dreamer” and Arnold Schoenberg’s Pierrot Lunaire. Now in a cusp where early practitioners are collaborating with their beneficiaries, free jazz can reassert its values within a context that gives priority to history or to the moment, which exists beyond the clutches of history.

The five musicians gathered for this recording have clearly chosen the latter. This is particularly noteworthy given the presence of pianist Burton Greene, an icon by virtue of his early recordings and membership in the Jazz Composers Guild, and an enigma because of long subsequent stretches off the radar. This album could have easily been about little else other than Greene, and justifiably so. Yet, the imperative of the collective has remained deeply ingrained in Greene’s sensibilities, repeatedly manifesting itself throughout the album as keen, ensemble-minded playing. Additionally, the moments that highlight Greene emerge unforced, and eclipse with equal ease.

This speaks to the qualities of the contributions by the other four musicians, each a leader in their own right and a substantial contributor to New York’s free jazz community. Of them, Rob Brown may have the lengthiest CV, but Brian Groder, Adam Lane and Ray Sage are respectively well-credentialed. Greene joins an impressive list of luminaries from their aggregated résumés, including Sam Rivers and John Tchicai. Most importantly, they bring mature voices to the proceedings, their interaction conferring formal properties onto the moment while vaulting the ensemble into the next.

Perhaps ironically, the album’s sole composition, Greene’s “Hey Pithy, Can You Thropt the Erectus?,” provides fine initial insight into the chemistry of the eight collective pieces that use loosely described rendezvous points . The referenced Mingus composition is a bellwether of faux primitivism in jazz, an erudite projection of the primal, which remains a tenet of free jazz. But, Greene’s title and materials also convey time-honored jazz values like whimsy and humor, which yields a contrasting form of banter. Both modes of interaction and the many gradations between them stream through the album.