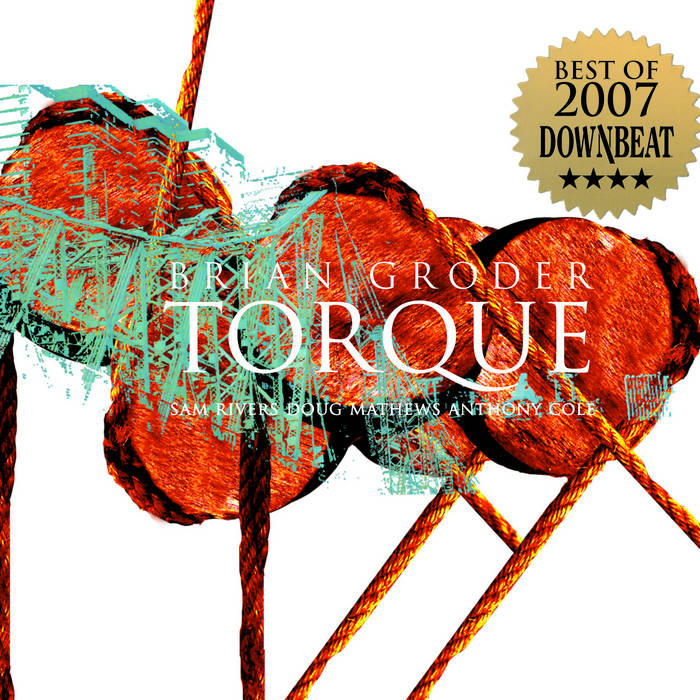 "Brian Groder brings impressive focus and impeccable chops to this encounter with Sam Rivers. The trumpeter holds his own as a player opposite a true giant of jazz, bringing poised, muted trumpet figures that fit perfectly with Rivers' elaborate flute filigrees on the freely improvised 'Behind the Shadows Part 1'. He also asserts his presence confidently into a tight band that's been going for more than a decade, finding firm footing in 'Oculus''s relaxed, swinging groove and joining into the collective tumult of 'Betwixt'. The other two players get a couple duets apiece with Groder, and each offers a strong example of unflagging engagement. The opener, 'Spellcast', features drummer Anthony Cole's masterful management of tension with fluid shifts from cymbals to toms. Bassist Doug Mathews' adroit shifts between unison and counterpoint on 'Jingo' are impressive.
While it's Groder's date, Torque is an excellent opportunity to hear Rivers in a two-horns-and-rhythm-section setting that he hasn't employed for a while. His adroit tenor turn on 'Diverging Orbits' sounds individual yet completely integrated into Groder's free-bop framework; the energy and attunement of his playing belies the fact that he was 81 years old when this disc was recorded. Somehow that makes this recording seem even more special. Four Stars."
~Bill Meyer, Downbeat

"The axis on which this session rotates is the superb rhythm section of bassist Doug Mathews and drummer Anthony Cole. That said, Torque is likewise an intergenerational jazz jaunt that works exceptionally well due to several factors: the extreme level of comfort that flutist/saxophonist Sam Rivers has with this rhythm section; the fact that Rivers, at the age of 83, can still blow away just about anybody; and compositional skills of the driving force behind this date — trumpeter/flugelhornist Brian Groder... who is a shining light in NYC's new jazz avant-garde, leads the proceedings with an emphasis on his flugelhorn and intersperses ensemble playing with duets of various pairings on these 14 compact pieces...All four of these musicians are able to use the full range of their instruments to quell or excite and whether it is a gorgeous duet, tight ensemble playing or Rivers and Groder spitting fire, Torque twists and turns easily to move through its free and structured spaces."
~Elliot Simon, All About Jazz-NY

"Here’s a superior set of contemporary jazz, blazing straight out of the long and unruly heritage of left-field explorations. Rising trumpeter and composer Groder is here teamed with the eminent saxophonist and flautist, Sam Rivers, plus Rivers’ usual rhythm section of bassist Doug Mathews and drummer Anthony Cole. Together, they whip up a bubbling, effervescent concoction of jagged, free-jazz group improvisations and hard-swinging free-bop that recalls Miles Davis’s mid-’60s ‘time no changes’ output as much as it does Ornette Coleman’s confounding harmolodic experiments. Groder and Rivers seem unnaturally in tune, weaving lines around each other, finishing each other’s thoughts and anticipating statements with razor-sharp accuracy. And the Octogenarian Rivers remains a commanding presence, attacking his sax with a fiery vigour that leads one to conclude that, in his case, jazz is, indeed, the healing force of the universe." ~Daniel Spicer, Popmatters.com (UK)

"This is a wondrous display of the art of improvisational music. Sam Rivers probably needs no detailed introduction -- Miles Davis's classic tour of Japan in 1964, Blue Note classics like Contours and Dimensions & Extensions, Conference of The Birds (in the Dave Holland Quartet) and Studio RivBea in the 70s, etc. Simply a 24-karat "avangardista". Rivers is today in his eighty-third year, but still blows as if he is en route to make his first record for Moserobie [a Swedish jazz label]. His regular trio, comprising the bass player Doug Mathews and drummer Anthony Cole, swing, drive and communicate exactly as only a properly organized free-jazz trio can.
Brian Groder, a several-years younger New York cat, contributes with innovative compositions and a fat trumpet tone that is always ready to take over after Rivers nervy but always inventive saxophone cascades. Instead of letting the music trail out in tracks longer than a taxi ride to Bergsjön, this exceptional compressed free-bop is refreshingly uncommon. Torque contains 14 tracks, most of which clock in at around 3-4 minutes, and you'll play the disc so many times, trying to find your favorite part, that the batteries in your remote will die. It's that kind of thing." ~Jazz på Svenska, Sweden

"The best of Groder's last three CDs. Sam Rivers has been working together with his trio for the past 15 years ... Groder plays just like one of their members - the unity is superb. Groder's trumpet play sounds like Dave Douglas — marvelous!" ~Swing Journal, Japan


"a varied, frequently absorbing program of fourteen musical vignettes that course through just about every melodic possibility, tonal inflection, dynamic level, rhythmic path, and instrumental texture available to four unique yet synchronistic players—without chordal instruments—in exchange for a return to the fundamental principles of melody and rhythm. In that respect, the music on Torque is as much reactionary as it is 'progressive'." ~Samuel Chell, AllAboutJazz

solo transcriptions of Iota; Behind the Shadows Part 1 and Jingo found at: www.briangroder.col